South Africa’s universities are among its most beautiful public buildings. Take a tour around Mzansi in mortarboard and robes with our roll call of higher ed beauties.

The University of Cape Town was founded in 1829 as the South African College, a high school for boys. In 1928, the university was able to move the bulk of its facilities to the magnificent site at Groote Schuur on the slopes of Devil’s Peak on land bequeathed to the nation by Cecil John Rhodes as the site for a national university, where it celebrated its centenary the following year. This unique group of buildings known as the Groote Schuur campus of the University of Cape Town, was built in the classical revival style and together with its open spaces constitutes the original campus as designed by architect JM Solomon in 1918. 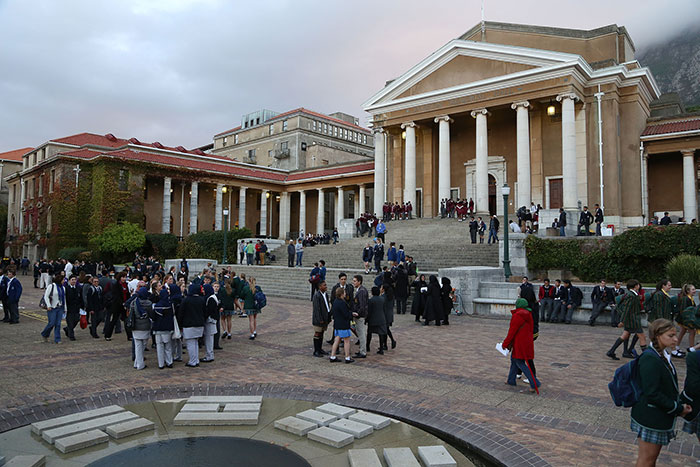 The building was restored by Herbert Baker in 1894, at which stage it formed the focal point of an avenue of trees running up the hillside from Rustenburg House and which, at the instigation of Cecil John Rhodes, was replanted with plumbago japonica, jacaranda and turkey oaks. A part of it, known as Japonica Walk, survives to the present day.

In 1887 this college was renamed Victoria College; when it acquired university status on 2 April 1918 it was renamed once again, to Stellenbosch University. The university campus is low-rise and a pleasure to walk or bike across, and is set in the heart of South Africa’s wine country.